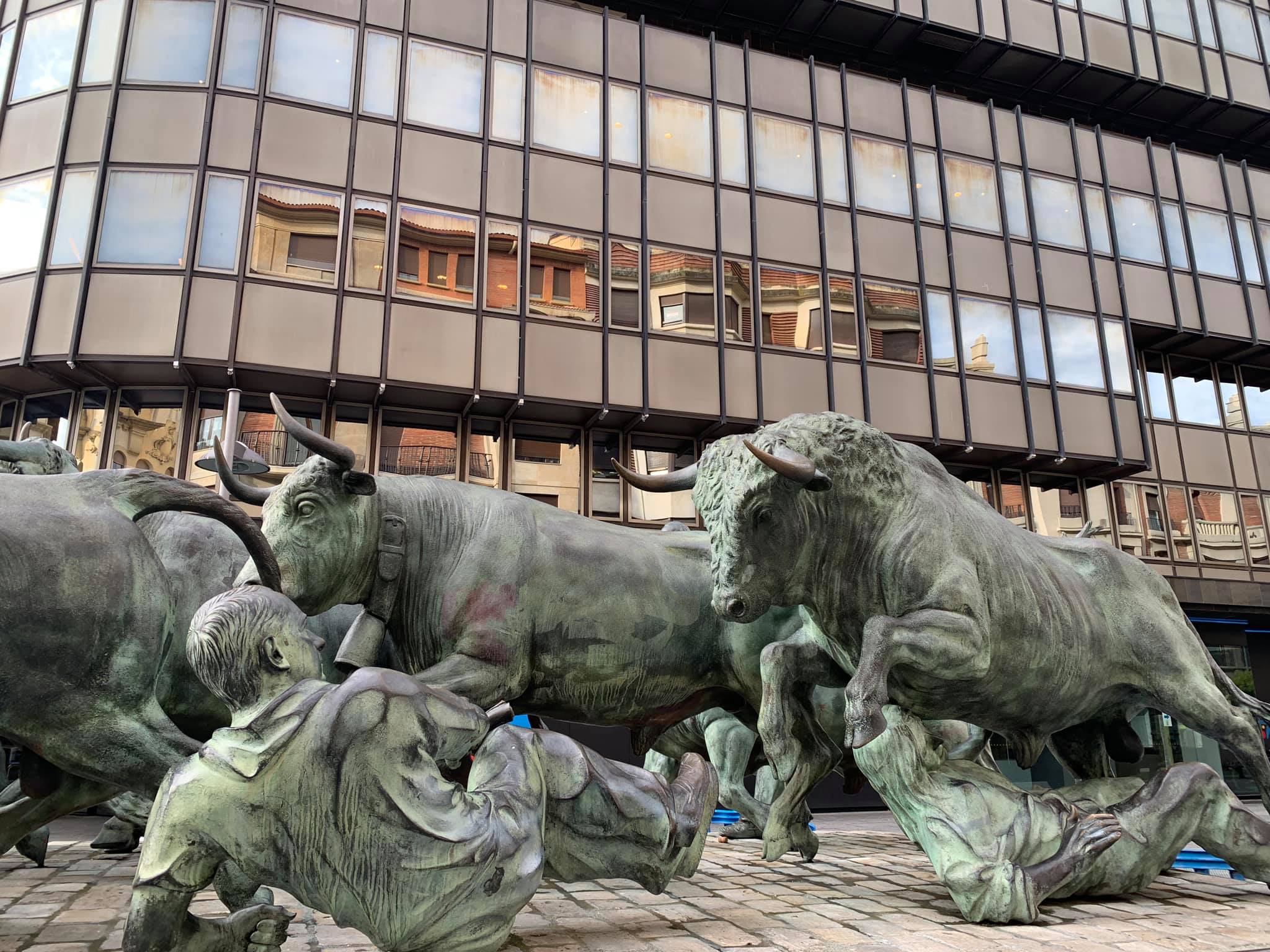 RUNNING OF THE BULLS IN PAMPLONA

By
Angel Reyes
on
May 3, 2022
Category:
Destinations
Tags:
Europe

Each year thousands of raving mad thrill-seekers descend upon the Northern, Spanish city of Pamplona, looking for adventure and a hit of adrenaline impossible to find anywhere else in the world. The running of the bulls, or Encierro, is as dangerous as it is fun, as repelling as it is alluring, attracting a type of tourist to Spanish shores seldom seen. If you prefer vacations that laugh in the face of danger, keep you on your toes, quite literally, and offer 7-days of non-stop fun, terror, and sheer lunacy, then the running of the bulls may just be the place for you.

The madness descends on Pamplona on the 7th of July and continues until the 14th of July. If you dare run the narrow streets of this ancient city, with some of the most terrifying cattle in all of Europe, you'll be in good company, with thousands of locals and tourists making the journey to Pamplona each year, for a party of epic proportions.

"This is one of the most exhilarating craziest experiences I've ever had in my entire life, literally death is a possibility because the bulls trample on anything in front of it. This is not just one little lap it's a marathon for one week straight. Some of the coolest parties I've ever been to and so very authentic Spain."

Getting to Pamplona is relatively straight forward. If you're arriving in Spain from an international destination, you'll most likely be coming into either Madrid-Barajas Airport or Barcelona-El Prat; both will see you well placed to head north to the bull run.You can take a direct flight to Pamplona, which takes about an hour and costs around $50. If you'd prefer not to fly and take in some of the Spanish scenery on the way, you could take a bus or train. Buses and trains run daily from Madrid to Pamplona, with prices ranging from $45 to $100, both taking around four and a half hours, respectively, to reach Pamplona. This is a great way to see a bit of Spain if time is on your side, if it's not, its best to take the short fligh

You can also fly direct to Pamplona, but it's a bit further away, so the flights are a little more expensive, coming in at just north of $100, and it will take you around an hour and 15 minutes to get there. Buses and trains are also an option from Barcelona, costing anywhere from $45 to $150, but take quite a long time, with the quickest clocking in at a little over 9 hours to get to Pamplona.

The festival of San Fermin, infamous, for it's running of the bulls has been held in Pamplona for hundreds of years and is most definitely the region's most prominent claim to fame. Exploding into the public consciousness gloriously, via Ernest Hemingway's classic novel, The Sun Also Rises, the 7-day event has seen its popularity increase year after year, despite the apparent controversy that usually accompanies anything related to Spain, bulls, and people.

The running of the bulls takes place each day at 8 a.m. and lasts anywhere from 6 to 8 minutes, with six bulls released at once, they are followed by hundreds of thrill-seeking locals and tourists, for a race covering about half a mile in total. So make sure you get there in plenty of time to get your place at the front, or perhaps more wisely, at the back!

Contrary to popular opinion, there isn't an official dress code to attend the event. Still, traditionally, participants wear white trousers, a white shirt with a red scarf tied around the waist, and a red handkerchief around the neck. For the full paisa experience, it's advised you grab the bull by the horns (something you shouldn't and actually cannot do in Pamplona, without a hefty fine) and join in on this centuries-old tradition.

Despite its popularity, the festival isn't without risk, with fifteen people having lost their lives at it since 1910 (when they officially started keeping tally). The most recent death occurred in 2009 when Daniel Jimeno Romero, a Spanish national, was tragically gored to death by a bull at the annual event, sparking an international outcry regarding the safety and morality of the bull run. Even so, the chances of being killed at the running of the bulls are pretty low. Nevertheless, injuries are prevalent, with around 200 volunteers ready to attend to the numerous medical injuries that arise each year, which range from the superficial to the quite serious. In 2019 alone, eight runners were seriously injured when they gored by bulls. Thankfully, all of them survived and have made a full recovery.

Most famous for its controversial bull run, the festival of San Fermin also plays host to one of the wildest and most epic non-stop parties in the world. That see's this normally quiet northern city come more to resemble one of the Spanish party islands, than the historic, quaint city it's known to be, off bull season.

Some head home after the bull run to get in some sleep before the festivities officially resume in the evening, many more, though, head out to the city's bars and cafes for beer, wine, and sangria. Partying right through until the late evening when the sky above Pamplona is lit up in a fiery, smokey haze, with one of the most impressive firework displays you are ever likely to see. There's plenty to do after the last firework goes off too, and these shenanigans last for the full week, with little time for sleep, as many of the city's bars and clubs stay open until 6 a.m., or never close at all.

The running of the bulls is considered a once in a lifetime experience, something to put on, and quickly cross off, your bucket list. If you're a thrill seeker, put the snowboard away and head over to Pamplona for one of the wildest, wackiest, and surreal spectacles you're ever likely to experience. The event isn't without risk, however, and you should exercise caution at all times. Still, overall, this is one of the most unique events in the European calendar, one that you'll probably need a two-week vacation to recover from once you get back home and definitely one to tell the grandkids about.