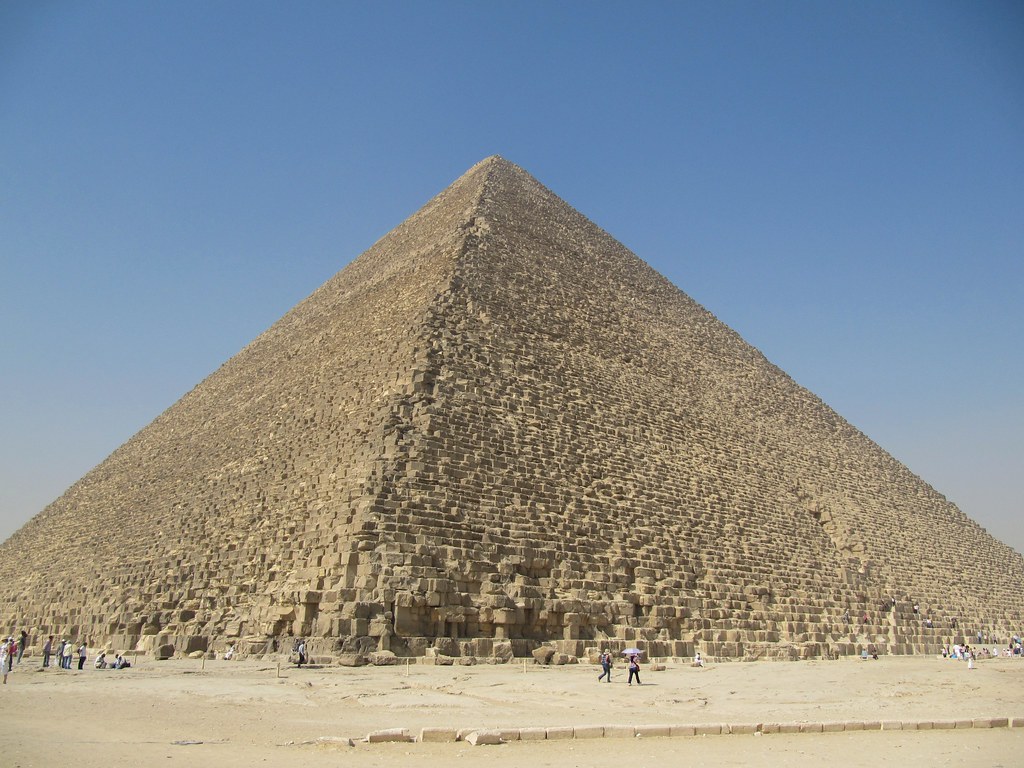 The most emblematic symbol of Egypt is undoubtedly the pyramid. The pyramidal masonry is symbolic and significant in Egyptian culture and today is one of the main attractions of the country. Today, historians have identified more than 100 pyramids throughout Egypt, most of which date from the Old and Middle Kingdom of Egyptian history. The largest and most famous Egyptian pyramid is located in Giza, just outside the Egyptian capital Cairo.

The mighty Pyramid of Giza, is also known as Pyramid of Khufu Pyramid or the Pyramid of Khufu and is oldest and largest of the three pyramids of Giza necropolis of the border in today's Cairo, Egypt and is the only remaining member of the Seven Wonders of the World antiquity. It is believed that the pyramid was built as a tomb of the fourth dynasty of Egyptian King Khufu (Cheops in Greek) and was built over a period of 20-year that ending around 2560 BC. The Great Pyramid was the tallest artificial structure in the world for more than 3,800 years. Originally, the Great Pyramid was covered with casing stones that formed a smooth outer surface. What we see today is the underlying essential structure. Some of the covering stones that once covered the structure are still visible around the base.

The red pyramid, also known as the Northern Pyramid, is located in Dahshur. Its name comes from the red limestone used for its construction. After the Pyramid of Cheops in Giza, the Red Pyramid has the largest pyramid base in Egypt. However, with its inclined sides of 43 degrees, it is much shorter at 104 meters. Today it is the third largest pyramid and the fourth pyramid of Egypt. Although not the biggest, it was the first successful sidewall pyramid built in Egypt and the origin of the Giza-style pyramids that many know.

After Giza and Saqqara, the field of pyramids of great historical importance throughout Egypt is Dahshur. In the heart of Dahshur is the vaulted pyramid, which dates back to 2600 BC. Built under the rule of Pharaoh Sneferu of the Old Kingdom. Bent Pyramid gets its name from its construction. The base of the structure rises from the desert floor at an angle of 54 degrees, but the angle of the tip is closer to 43 degrees. As a result, the pyramid on the side appears almost curved or titled. The formal name of the pyramid is the pyramid of Sneferu or the shining pyramid of the south.

Only 25 km south of Cairo is an area known as Saqqara, which contains a pyramid field filled with some of the first pyramids of Egyptian history. One of the largest is the pyramid of Djoser, considered the world's oldest building cup stone, so it is an important step for Egyptologists, archaeologists, and even architects. The pyramid of Djoser was built during the third dynasty of Imhotep, the vizier of the Pharaoh Djoser and was completed in the 27th century BC.