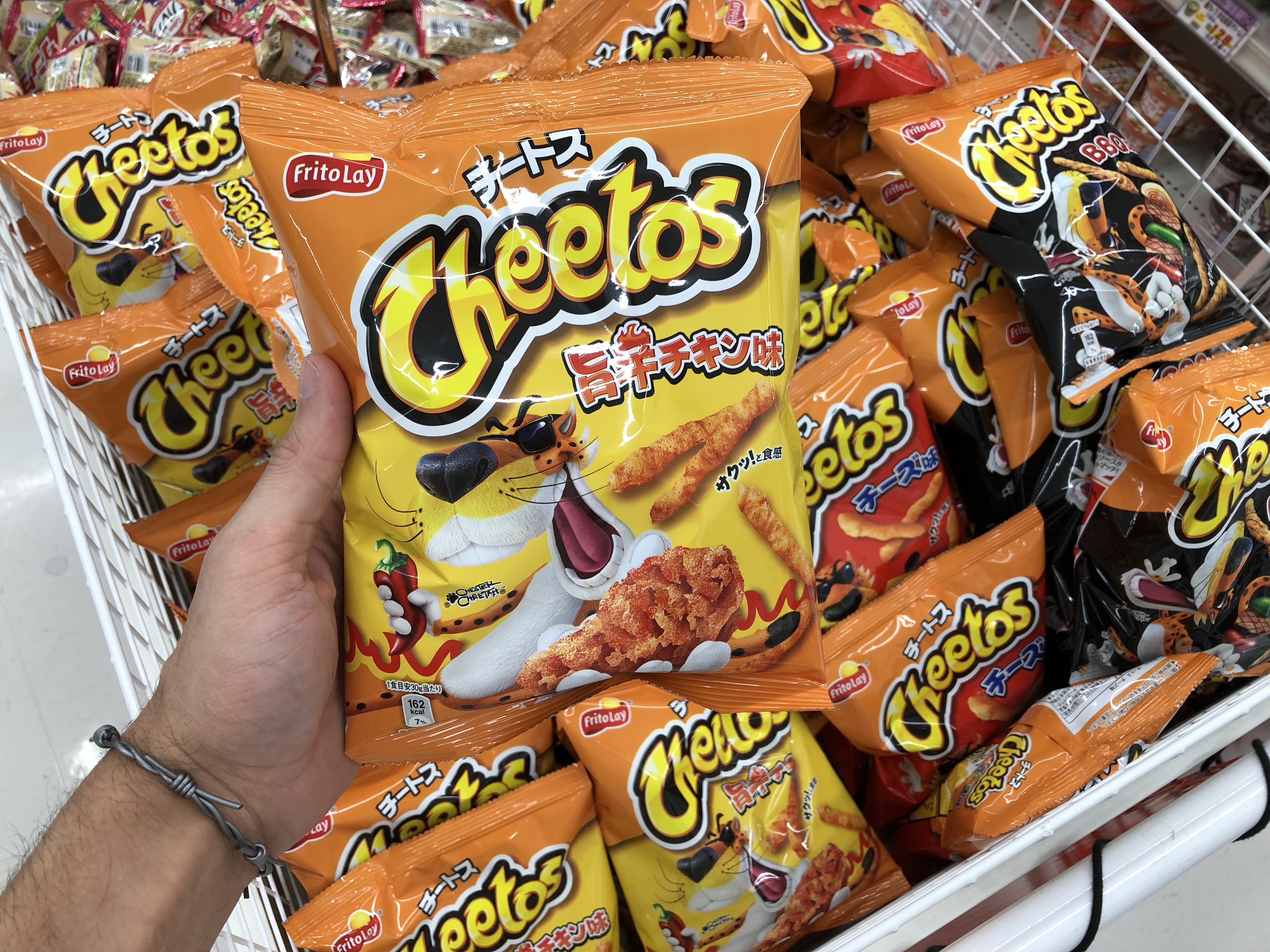 While abroad in Japan the city could get expensive so it's only smart to grab a quick snack, here are some of my favorites you can find while in Japan.

Japan's fast paced culture doesn't really emphasize the enjoying of a meal instead people are encouraged to eat quickly and not linger while walking with a bag of chips. For this I am proud to be American, I don't want to choke on anything so it was only natural for me to take my sweet time while indulging in different foods no matter how many annoyed looks I got from locals.

My first pick is an infusion potato chip with wasabi by Calbee, traditionally wasabi by nature is spicy and comes from an all natural root. This potato has a kick but was one of my favorites, if you're not into spicy this one is probably not for you.

No bag of spicy potato chips wouldn't be complete without gulping down with a refreshing beverage, my next food junk is actually a drink which I really enjoyed it very much. It's a Pokémon fruit and vegetable drink, yeah It was perfect for those hangovers.

The reason it's on my junk food list is because of the sugar it had was almost the same in a can of Pepsi. It's actually really  delicious, but I'm sorry charizard. I'm not sure what the brand is but you can find them in most vending machines throughout Tokyo, in a variety of different Pokémon artwork on them. Probably marketed for children but I wasn't attracted to it because of the vegetable content in the drink. Another interesting snack I was able to find in many convenient stores, it's like sushi bagel but with no hole in the middle. It's actually a combination of Rice, mustard seeds and also some tuna in the center.

A traditional wagashi, or Japanese sweet, called dorayaki. Thick anko bean paste is stuffed between two fluffy pancakes. These pancakes are much more airy than your standard pancake and melt in your mouth.

In regular cooking, kinako, a dry roasted soybean powder, typically seasons mochi. But, the flavor can be used to enhanced yogurt, baked goods, and, of course, candy. Hence, kinako sticks. The treat uses kinako powder mixed with a sugary syrup to create a satisfying stick candy.

Ready for a sugar high? Then grab a bag of konpeito--spiky little stars of pure sweet stuff. These are one of the most popular snacks in Japan, especially amongst children and have a remarkable history of being around since the 1700s, linked to the arrival of the Portuguese missionaries.

Although you might think ramune is just a beverage, there is also a ramune candy that is reminiscent of Sweet Tarts but better. The tablets are thicker, and as they melt, they get super creamy.

Though the name is one that raises eyebrows amongst tourists, Collon is a delectable treat of bite-sized crunchy wafer that comes with a number of fillings. Regular cream Collon is the most popular, but sometimes you can find seasonal flavors like mango pudding or banana foster.

Be prepared to see Bourbon Alfort Milk Chocolate and other variations, such as Matcha, Black, and Vanilla everywhere you go—and so you might think they’re not that special. Don’t underestimate the deliciousness of crunchy biscuits paired with smooth, lightly flavored chocolate. Buy your Bourbon Alfort snacks at Donki or drugstores, where they’re sold for cheap.

Crafted by Yurako Confectionery, Black Thunder is a ubiquitous snack bar that can be found in convenience stores, Daiso 100 yen, and beyond. It’s made up of chocolate, cookie, and puffed rice. Since the Beijing Olympics in 2008, the bar’s fame increased when gold metal winner Kohei Uchimura said that Black Thunder was his favorite treat.

Japanese people love their crunchy snacks, and Jagariko (じゃがりこ) is a common go-to for all generations. Though Calbee Jagariko comes in a number of flavors like cheese, buttered potato, salted lemon, and fried chicken, the most popular continues to be salad. The addictive potato sticks even feature little pieces of real carrot!

If you love ice cream, then forego ordering the standard matcha and go for murasaki imo (purple sweet potato). The richness of the ice cream, paired with the intrinsic sweetness of the potato, makes for a wildly different texture that makes humid summers in Japan much more tolerable. A must for the beach!

Now that you’ve seen the top junk foods in Japan, which one are you most hungry for?